Showing posts from March, 2020
Show all

Cordiners Artifacts: No 3 - Our snuff mull 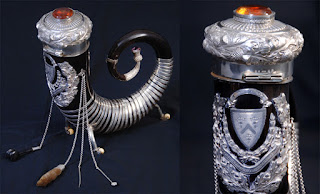 Many of the Crafts possess snuff mulls and pass them round at the end of their Choosing Dinners. According to Craig Bryce's commentary on the tradeshousemuseum.org site, "a  pinch of snuff is taken from the box and spread along the fleshy part of the upper thumb and then half is inhaled up each nostril.   The idea is that the snuff irritates the nasal passages and clears the airways." In the present writer's view the only thing likely to be irritated by such a disgusting habit is the unfortunate neighbours of the snuffer (and the watchful pianist) but thankfully hardly anybody actually tries it...... The mulls themselves are splendid items, usually made out of animal horns and richly decorated with silver, stones such as Cairngorms and coats of arms. Ours is a splendid example and we are much to civilised to encourage public sneezing by passing it round.... Photographed by George Mahoney Note for your diary! A team from the Cordiners will b
Read more
More posts